Dwelling on failure will actually help you improve your mindset, according to a study. 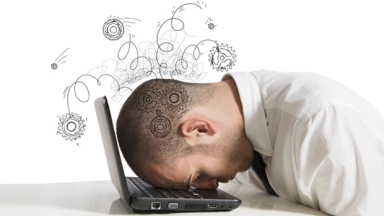 What’s the best way to handle failure? Feel the pain.

That’s right, instead of simply recalling past mistakes and thinking about how to prevent them, a recent study found that going through the emotional pain of failing is the best approach for correcting your mistakes and preventing failures at a later time.

Researchers from Ohio State, University of Kansas and Stanford conducted multiple experiments to uncover the most long-lasting and effective ways for people to deal with failures. They found that the pain failing causes has a more impactful effect compared to simply reflecting on a failure, which often does not involve thinking about ways to avoid similar mistakes.

In one experiment, the researchers asked 98 students to price search online for a blender. The person who found the lowest price would be deemed the winner and receive a cash prize. Before the winner was announced, half of the participants were instructed to focus on their emotions whether they won or lost, while the other half was told to focus on their thoughts over how they performed. In the end, the task was “rigged,” and all the students lost. The students were told to write down their experiences after each task.

In the same experiment, to find out if the students had improved and learned from the failure, researchers gave the participants an opportunity at redemption. However, the researchers also wanted to see if students would make the same mistake completing a similar task vs. a completely different task.

While some students were still told to focus on their thoughts and others their emotions, this time, half the students were given another price-related task and told to look for the most inexpensive book to gift for a friend. The other half was given a new task to find any book they thought would be the best gift for a friend. As a result, the students completing the price-related task who were focused on their emotions spent 25 percent more time — and hence, were more motivated — searching for the lowest-priced book, compared to students focused on their thoughts. All of the students tasked with finding the “best gift” did not show any difference.

“When the participants focused on how bad they felt about failing the first time, they tried harder than others when they had another similar opportunity,” explained Ohio State professor and study co-author Selin Malkoc. “But the situation has to be similar enough to trigger the pain of the initial failure.”

To understand why students who simply thought about failure did not try to work harder to correct their mistakes, researchers found that those people were more protective of their egos. By looking at what they wrote down about the experience, most of their thoughts were excuses such as “This wasn’t my fault” rather than self improvement-focused, for example, “I can do better next time.”

In another experiment, researchers did not instruct participants on how to respond to failure — it was up to them to take either the emotional or cognitive routes. By default, a majority of participants thought about failure, and these thoughts were again self-protective rather than self-improvement based.

“Emotional responses to failure can hurt. They make you feel bad. That’s why people often choose to think self-protective thoughts after they make mistakes,” Malkoc said. “But if you focus on how bad you feel, you’re going to work harder to find a solution and make sure you don’t make the same mistake again.”